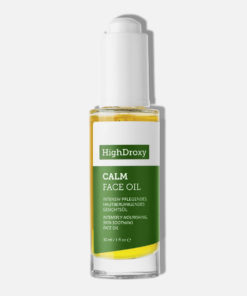 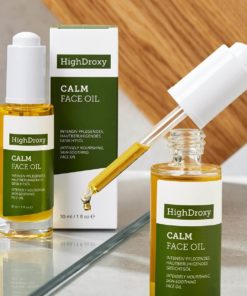 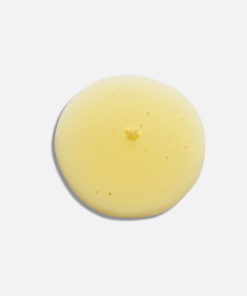 Our gold standard for a facial oil: this blend of 15 high-quality oils soothes, nourishes and protects irritated, sensitive skin.

The CALM FACE OIL is much more than just a nourishing facial oil: it has extensive skin-soothing, restorative and balancing properties and can even significantly improve eczematous skin conditions. The exclusive blend of 15 exquisite oils and plant extracts provides the skin with antioxidants, ceramides, phospholipids and valuable fatty acids. For a strengthened skin barrier and a skin surface as if "putty": Smoother, calmer, softer.

Flexible application: As a lipid booster for individual enrichment of the moisture care or pure as a strong caring facial oil. Absorbs quickly and leaves no oily film on the skin.

SQUALANE(Squalane is a vegetable oil; it preserves moisture, makes the skin feel silky and improves the absorption of the preparation), ORYZA SATIVA (RICE GERM) OIL(rice germ oil absorbs UVA/UVB rays and soothes the skin) ARGANIA SPINOSA SEED OIL(argan oil is quickly absorbed, smoothes fine lines, regulates sebum production and has a moisture-retaining effect), ADANSONIA DIGITATA SEED OIL(baobab oil has a regenerating, anti-inflammatory effect, improves the elasticity and firmness of the skin and has a very long shelf life), AVENA SATIVA SEED OIL(oat seed oil has a moisturising and soothing effect on the skin), OCTYLDODECANOL(octyldodecanol is a fatty alcohol with a smoothing and nourishing (because it re-fats the skin) effect), ECHIUM PLANTAGINEUM SEED OIL(Echium oil protectsthe skin barrier and has an anti-inflammatory effect), HELIANTHUS ANNUUS SEED OIL UNSAPONFIABLES (The unsaponifiable part of sunflower oil is used as emollient; the skin becomes soft and smooth), CARDIOSPERMUM HALIACACABUM FLOWER/LEEF/VINE EXTRACT(Balloon Reed Extract has a strong anti-inflammatory effect, against redness and itching and soothes the skin), LIMNANTHES ALBA (MEADOWFOAM) SEED OIL(Meadowfoam Oil forms a protective cover around the skin without being occlusive (sealing); it also has a deodorizing effect), BRASSICA OLERACEA (BROCCOLI) SEED OIL(broccoli seed oil protects the skin, has a regenerating and cell-activating effect), HELIANTHUS ANNUUS SEED OIL(sunflower oil is a light care oil and active ingredient carrier), TOCOPHEROL(vitamin E has a strong antioxidant effect as it binds free radicals and slows down oxidation processes), VACCINIUM MACROCARPON (CRANBERRY) FRUIT EXTRACT(cranberry extract protects against oxidative damage and can slow down the skin's ageing process; it also has a natural disinfecting effect), CITRUS RETICULATA (ITALY) PEEL OIL(tangerine oil has a calming and relaxing effect on the skin and is a natural fragrance), HIPPOPHAE RHAMNOIDES FRUIT EXTRACT(sea buckthorn extract has an anti-inflammatory and regenerating effect), ROSMARINUS OFFICIALES LEAF EXTRACT(extract of rosemary leaves; promotes blood circulation, skin metabolism and has a strong antioxidant effect), Limonene (contained in the above mentioned extract), Limonene (contained in the above mentioned extract), Limonene (contained in the above mentioned extract), Limonene (contained in the above mentioned extract).natural mandarin oil)

As a booster:
Mix your favorite moisturizer in the palm of your hand with 1-2 drops of CALM FACE OIL, before applying, to enhance its nourishing effect.

Pure:
Depending on the desired richness, apply 2-4 drops of CALM FACE OIL pure as a facial oil on cleansed skin.

Am I shiny after applying CALM FACE OIL?
The CALM FACE OIL is a so-called dry oil, which is usually absorbed well and does not leave a greasy film. The absorption behavior is influenced by other care products as well as your skin type.

Does the CALM FACE OIL help with eczema?
The CALM FACE OIL has strong repairing ingredients - especially it is rich in ceramides and phospholipids. Ceramides are important lipid building blocks of the skin that are responsible for the cohesion of skin cells and are lacking in eczema. For this reason, the CALM FACE OIL can be a good care for eczematous skin conditions.

A favourite of mine

I have loved this oil since day one... Depending on how dry my skin is, the amount needed is simply mixed into the day cream! Great idea and totally gentle and soothing to the skin!

Eva
5/5
My best skin oil ever (my skin type: sensitive, dry). I round off my day care in winter with it; I also use it solo; but it can also be combined excellently with the HighDroxy "modular elements" in every season, depending on my needs. Indispensable for mic...
Show More
h!
Show Less
Angela S.
5/5

I love the oil. Gives the Restore Cream the extra care my skin needs now.

Haven't used it yet, I'm waiting for the cold days...But I'm sure the oil is great like all the other products.

I mix the oil with my day care, it makes it feel wonderful and gives it extra care and precious oils that are good for me!

Great for mixing into the night cream, very nourishing.

A great and very well tolerated facial oil, no more feeling of tension on the skin.

M. Sörensen
5/5
LIPID'OR is an incredibly nourishing face oil; to date it is the best I have bought. It can be applied alone or mixed with a day or night cream. It leaves the skin of the face very smooth and nourished. I highly recommend it to others....
Show More
Recommend. Unfortunately, I don't like the handling of the pipette. The glass thread can get oily and smear due to a small carelessness of a drop. But that's my personal opinion - it has nothing to do with the product itself. with the good product itself.
Show Less
A. Hamm
5/5

Great nourishing oil, not heavy on the skin and I can mix it individually with my cream.

Light, very well tolerated oil, even for my sensitive skin.
I don't want to do without it during the cold season.

Gives me great moisture as well as oiliness on my skin, highly recommended for dry skin

Tölle's oil is one of the best there is.

Super moisturising, pleasant fragrance, great skin feeling. I mix a few drops with the Restore, so the oil is also very economical.

Especially now in winter, the skin can use a little extra care.

The Hydro Cleanser has not yet been tested by me. Therefore, no evaluation is possible at the moment. In this respect, I can only give a positive assessment of the fast delivery.

"The CALM FACE OIL is our gold standard for a facial oil. We are convinced: This combination of healing, balancing and barrier-repairing oils is unique on the market. We have combined a total of 15 oils and oil extracts, and made sure that their fatty acid profiles complement each other perfectly. The customer reviews speak for themselves - take a look!"

ROUND MIXTURE: THAT'S HOW IT WORKS CALM FACE OIL 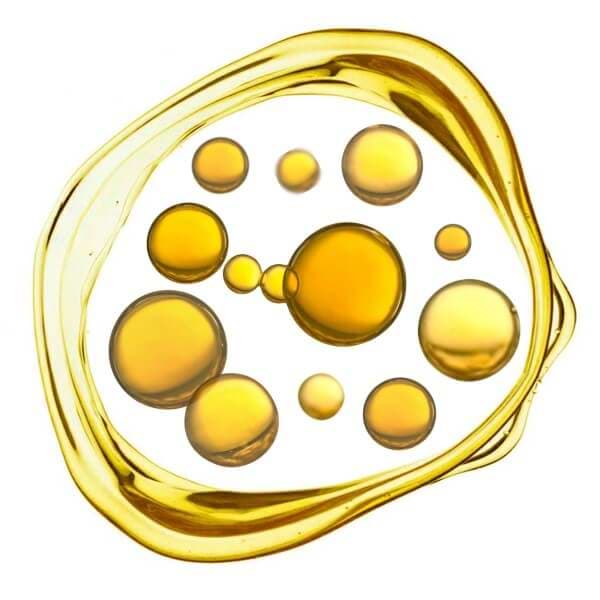 The CALM FACE OIL combines oils and extracts from 15 different plants - including exotics such as Indian balloon vine, plantain-leaved viper's bugloss, broccoli, cranberry and oats, but also 'classics' such as squalane or argan. Each of these ingredients has been selected for its nourishing, healing and repairing properties.

The difference between CALM FACE OIL and other oil mixtures is the high proportion of different, optimally complementary fatty acids, but above all the content of ceramides and phospholipids. These are far from being found in every skin care oil! They are essential for the health of the skin:

All in all, this results in extraordinarily caring and skin-soothing properties - without any oily feeling on the skin.

PRO-TIPS TO THE CALM FACE OIL

Did you know that CALM FACE OIL can also be used for combination skin? To do this, use the high-quality oil like a cure together with a pure moisturizer - preferably with a very low or completely lipid-free content, such as the hyFIVE SPRAY or the hyFIVE BOOSTER. By the way, combination skin benefits from the exquisite oil composition, especially in winter.

For all those who have very dry skin, we recommend enriching e.g. RE:STORE with a few drops CALM FACE OIL: Simply add a few drops of the oil in the palm of your hand to RE:STORE and mix briefly with your fingertips before applying. Your skin will enjoy the extra portion of richness. 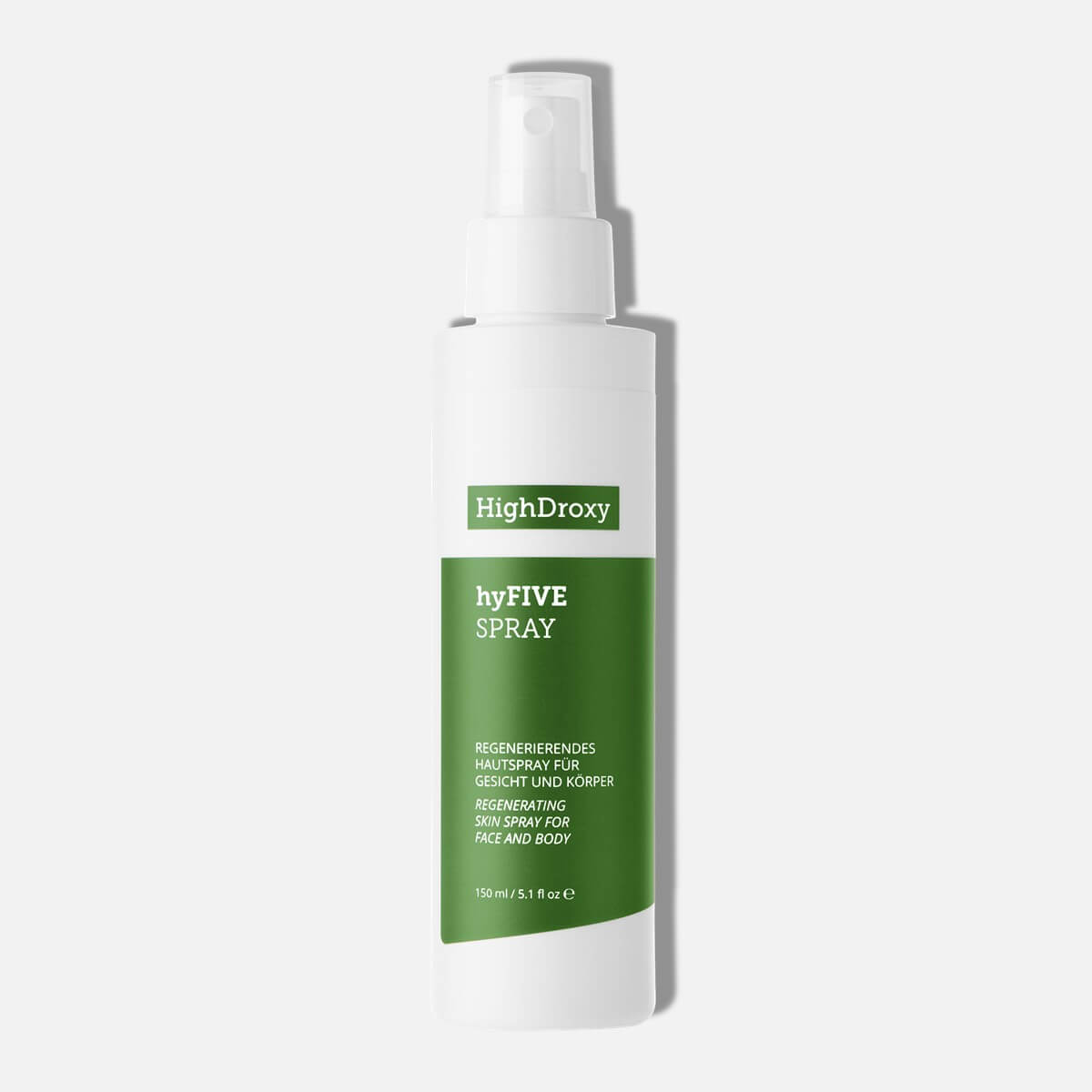 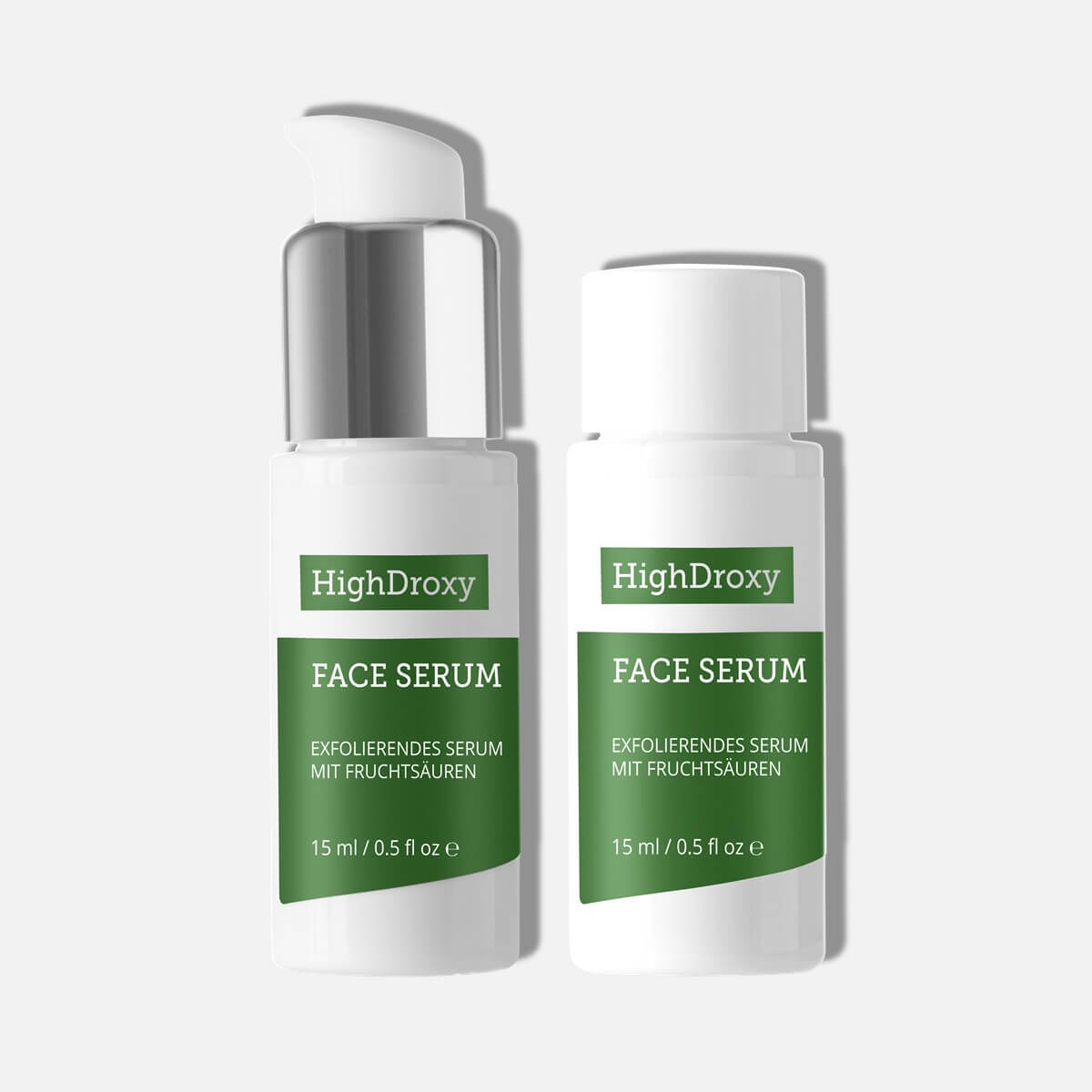 quick purchase
Out of stock

Gentle fruit acid peeling with mandelic acid and niacinamide. For the renewal of the skin's appearance with little irritation. 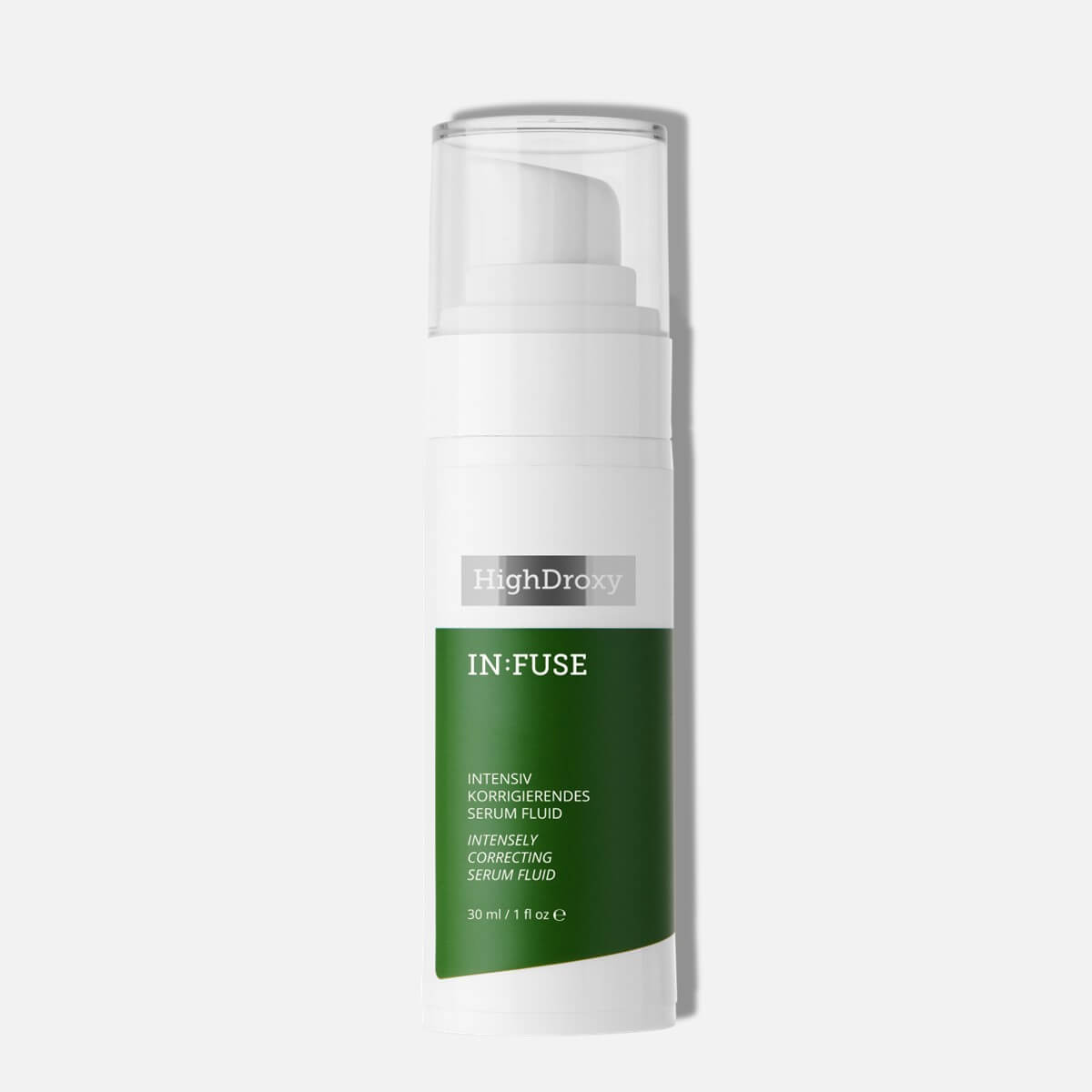 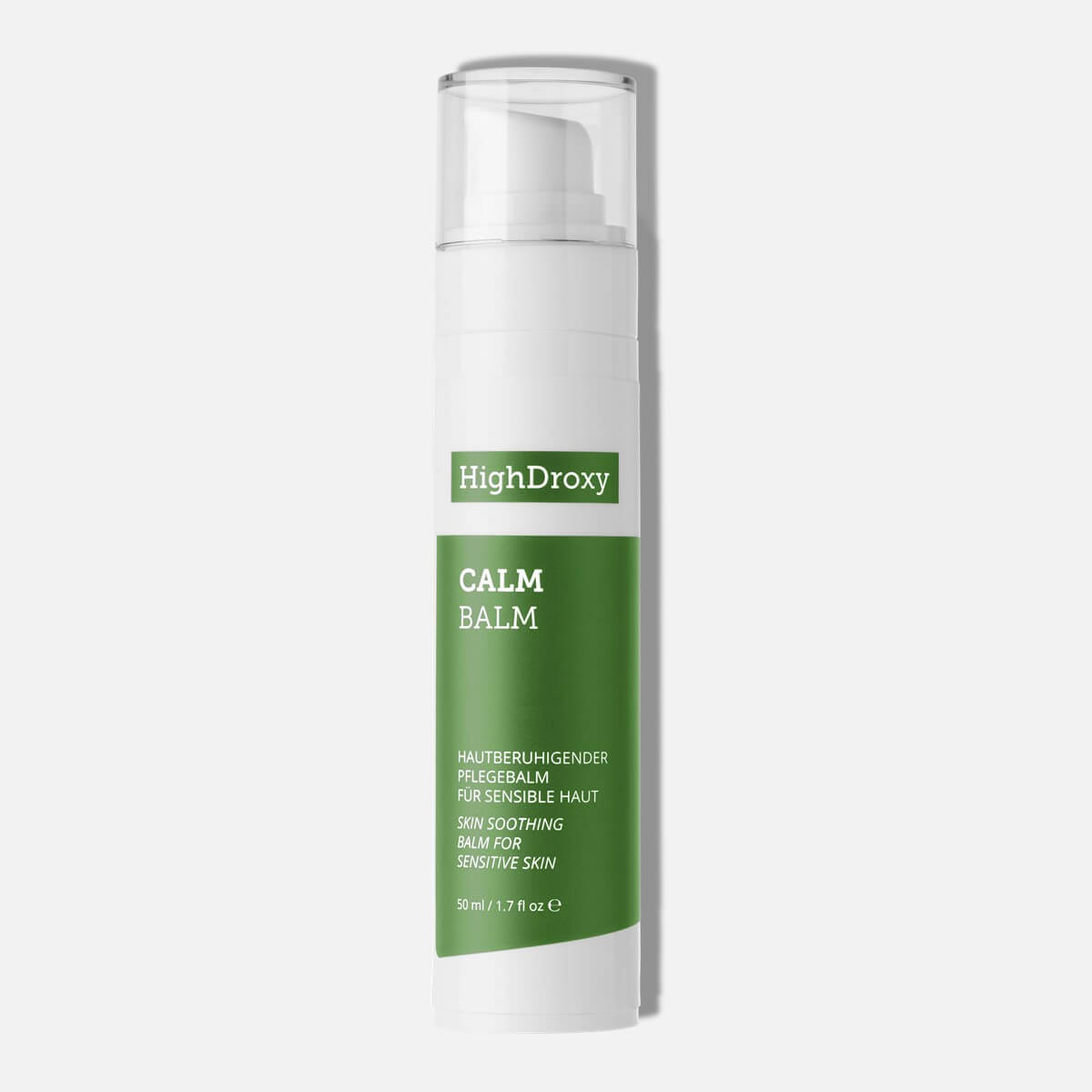